On Monday, Housing Tides released its monthly housing research and analysis index, reporting that the national index score for market health fell to a value of 70.1 this month—the lowest value since June 2016.

Housing Tides Index ranks according to where each metro area lies with regard to each indicator’s “healthy” range. A perfectly healthy market would receive a score of 100.

According to the report, driving the significant drop in the index nationally was the release of 2016 local household formation data, released this month, from the U.S. Census Bureau’s ACS.

Due to the data from the bureau’s survey, the index component that measures the ratio of housing permits to household formations “worsened considerably.” The ratio changed from a healthy 1.24 in 2015 to a “less-ideal 1.83 in 2016.”

In addition, while the U.S. saw 1.19 million housing permits approved in 2016, the ACS data show that there were just 652 thousand new households formed—comparable to 2015, with 1.18 million permits approved and 949 thousand new households formed.  Housing Tide’s analysis indicates housing construction is outpacing household formation by a large margin, with the extreme shortage of homes for sale, which fell to 2.8 months of supply.

“It’s possible that investors and second-home buyers continue to snap up homes, increasing the demand for housing beyond what the household formation data would suggest,” the report noted. 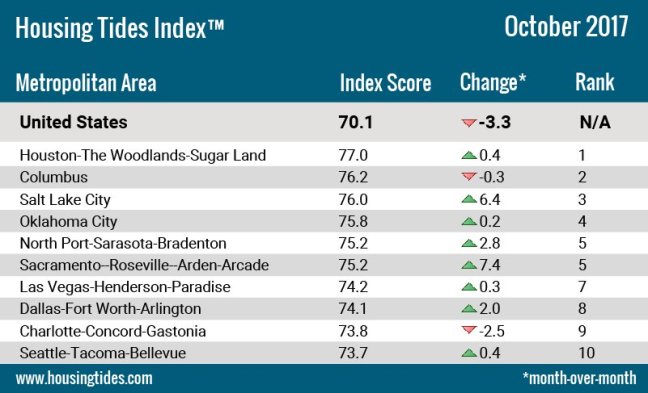