California again leads list with 6 of the top 10 most polluted U.S. cities

California’s smoggy reputation appears to be deserved: Six of the USA’s 10 cities with the worst air pollution are in the Golden State, according to a new report.

Bakersfield, Calif., again holds the dubious distinction of having the USA’s most days of highly polluted air, based on data from 2013-2015, the American Lung Association’s annual “State of the Air” report released Wednesday found.

California’s soaring population and topography allow air pollution to overcome the state’s strict environmental laws, said Paul Billings of the American Lung Association. The boom in people brings with it an increase in cars and trucks on the roads, and many of those people live in valley and basins, right where pollution tends to settle.

The state would be far worse off without its strict laws on tailpipe pollution and eliminating coal-fired power plants. “They’ve done more than any other state to counteract air pollution,” Billings said.

Overall, the report is a mixture of good and bad news: While year-round pollution has improved, short-term spikes of intensely polluted air have increased.

“While most of the nation has much cleaner air quality than even a decade ago, many cities reported their highest number of unhealthy days since the report began” 18 years ago, it found.

Some 125 million Americans nationwide live with unhealthful levels of air pollution, the report said, placing them at risk for premature death and other serious health effects such as lung cancer, asthma attacks, cardiovascular damage and developmental and reproductive harm. 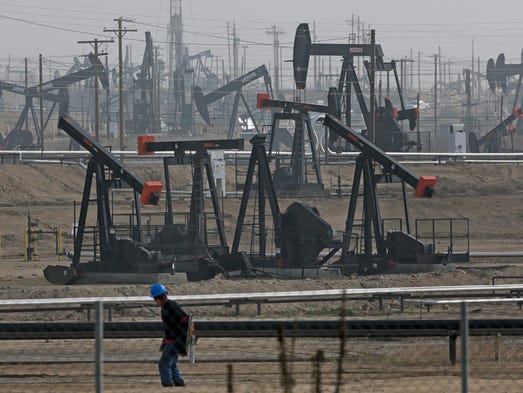 According to the American Lung Association’s annual “State of the Air” report, Bakersfield, Calif. holds the top spot of having the most days of highly polluted air, based on data from 2013-2015.  Jae C. Hong, AP
Tourists at the Griffith Observatory observation deck look out at the Los Angeles city s

“Even with continued improvement, too many people in the United States live where the air is unhealthy for them to breathe,” the report said.

Billings said he’s concerned about Trump’s plans to slash the Environmental Protection Agency’s budget. “We have to keep the environmental cop on the beat,” he said.

Trump’s budget proposal contains a 31% cut to the agency, including weakening or eliminating the Clean Air Act, which the report says has been the most important tool in the fight for healthy air by driving emission reductions for more than 47 years.

“Everyone has a fundamental right to breathe healthy air,” said Harold P. Wimmer, the president and CEO of the American Lung Association said.

~ I know we are needing some improvement, but we are doing a lot better than we were 30 years ago. And yay for the Inland Empire who is usually up in the top part of this list ~