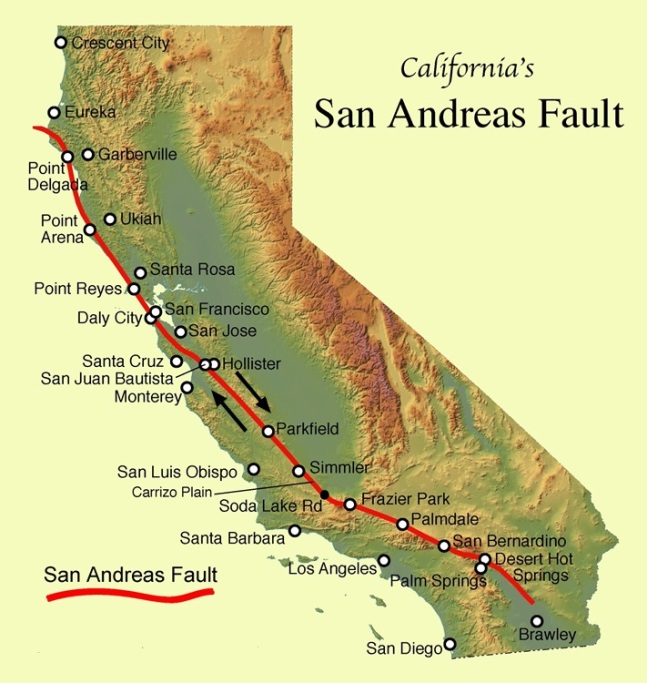 Southern California’s smaller cities and large businesses must take the threat of a crippling earthquake far more seriously than they have been, a committee of business, public policy and utility leaders said Thursday, saying action is needed to “prevent the inevitable disaster from becoming a catastrophe.”

Despite strides made by the city of Los Angeles to focus on earthquake safety, Southern California still faces significant threats that haven’t been resolved.

One of the most ominous is the looming threat on the edge of Southern California’s sprawling metropolis — the Cajon Pass. It’s a narrow mountain pass where the San Andreas fault — California’s longest and one of its most dangerous — intersects with combustible natural gas and petroleum pipelines, electrical transmission lines, train tracks and Interstate 15 north of San Bernardino.

A huge earthquake on the San Andreas could move one side of the fault as much as 30 feet from the other. Such an earthquake would rupture flammable pipelines and lead to a catastrophic explosion so powerful it leaves behind a crater.

And if utilities aren’t able to shut off the flow of petroleum or natural gas, firefighters could be helpless to keep a raging wildfire from spreading across the San Gabriel and San Bernardino mountains, just as the rest of Southern California staggers from the worst earthquake it has seen in more than 150 years.

There are solutions to these problems, said seismologist Lucy Jones, who advised the Southern California Disaster Risk Initiative Committee. But little has been done precisely because many people don’t know the extent of the problems, and, if they do, fixing them seems so daunting.

“Don’t fall into the trap of, ‘It’s so impossible, so we can’t do anything,’ or, ‘We have to do everything.’ Take a piece. Get it done. You’re now better off. Go on to the next one,” Jones said. “There’s plenty that can be done.”

Their pitch: create a Southern California Disaster Risk Reduction Initiative, intended to highlight the unresolved earthquake risks and convince decision makers to fix them. The group issued a report with recommendations on Thursday.

“It’s easier to bury your head in the sand, but that’s no longer an acceptable answer,” said John Bwarie,  the committee’s project coordinator.

Here are five major threats Southern California faces that could imperil our ability to recover after a massive earthquake strikes the San Andreas fault, and how they could be fixed:

One way to reduce the risk of catastrophe at the Cajon Pass would be to put shutoff valves on both sides of the San Andreas fault on petroleum and natural gas pipelines. If the pipelines are automatically turned off during the earthquake, it could prevent huge amounts of fuel from being ignited if the pipelines break, Jones said. Officials say a big quake on the San Andreas is overdue.

Small changes can make a big difference. Jones recalled the meltdown of a Japanese nuclear power plant after a 9.0 earthquake and tsunami hit in 2011.

A meltdown might’ve been avoided had the backup cooling system’s diesel fuel was stored at a higher elevation, keeping it functioning even after the tsunami hit, she said.

2. In cities, water pipes and natural gas lines will burst during shaking.

Some experts point out that  it’s impractical to retrofit all of Southern California’s water pipes with earthquake-resistant, flexible versions in our lifetime. But even some retrofitting would help.

3. Large businesses and local politicians may be underestimating the worst-case scenario.

Many people don’t know how bad the aftermath of a huge earthquake can be: “Water and power delivery systems could be off for weeks, housing for tens of thousands could be damaged,” the report said, an event far worse than experienced by veterans of the 1994 Northridge earthquake.

Large businesses need to  develop a plan for getting back to work as quickly as possible. The worst-case scenario would be that major industries, such as aerospace, give up and leave Southern California if the region remains dysfunctional for too long.

That means businesses like banks need to know how to get their branches running as quickly as possible, perhaps by installing backup generators and keeping caches of emergency supplies on site.

If it’s too hard to have a home improvement chain keep all of its branches open in, say, Granada Hills, Northridge and Chatsworth, perhaps one plan would be to keep just the Northridge store operational, Bwarie said.

4. Many Southern Californians don’t know their neighbors, and that’s going to hurt neighborhoods’ ability to recover.

A key factor that could determine what neighborhoods survive and which ones are abandoned after an earthquake is how well the neighborhood works together to recover, instead of giving up and leaving town.

Southern California, unfortunately, has a reputation for neighbors not knowing each other.

But things can be done to help establish a sense of community, such as cities encouraging block parties or organizing people to check in on each other after an earthquake.

One idea Jones is working on at her own church is creating a system in which people are assigned to check on each other after an earthquake hits, and complete a drill on that annually.

5. Many cities do not require collapse-prone buildings to be retrofitted.

The city of Los Angeles has moved ahead on requiring apartments and concrete buildings at risk of collapse to be retrofitted, but most of Southern California’s vast suburbs have not followed suit.

In fact, there are cities that haven’t even done what Los Angeles began in the 1980s: requiring the retrofit of deadly brick buildings, whose bricks turn into projectiles in even slight shaking. The two women who died in the 2003 San Simeon earthquake in Paso Robles died as the facade of an unretrofitted brick building collapsed.

Another problem: The minimum standard for new buildings permits them to be so severely damaged in an earthquake that it might need to be torn down. The only requirement is that people not be killed by that building in an earthquake.

“Cities have to ask themselves: Are you approving buildings that are designed to fail — but won’t kill anyone? That doesn’t do much for our economy,” Bwarie said.

The committee suggests creating a uniform standard that would make it easier for building owners to choose higher levels of minimum safety, such as a building that would remain in operation even after a significant earthquake.

“Southern California’s vulnerability to natural disasters demands that we look forward and prepare,” Hasan Ikhrata, executive director of the Southern California Assn. of Governments, said in a statement. “It is critical to our economy, and to the 18 million residents in the region.”