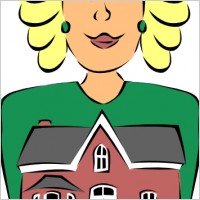 Why Do I Have to Pay My Real

From Credit.com 7/20/15
Selling a house can be expensive. Not only are you probably going to have to lay out some cash to spruce it up so you can get top dollar, you also have to plan on paying a real estate commission, which usually runs 6% of the sales price. On a $300,000 home that’s $18,000 — not a small chunk of change.

In the 1940s and ’50s, the National Association of Realtors required its members to set commissions at a certain level — and also required its members to either work full time or have enough customers to earn a living as a Realtor — in order to join (only members had access to the Multiple Listing Service). In 1950, the Supreme Court ruled that requiring certain rates was illegal. (After that it became a “suggested” rate, some sources say.)

How it became 6%, however, no one seems to know.

“I have been in the industry for nearly 40 years and know of no one who can say how, when or why it was established originally,” says Steve Murray, president of REAL Trends, which tracks real estate data. “I do know that we have been tracking it since 1991 on a national level (and are used as the source for such data by the Federal authorities) and it has fallen from an average of 6.1% that year to just above 5.18% in 2014. We see signs that it is continuing to decline at this time,” he said in an email.

Is the 6% Commission Outdated?

One thing to keep in mind is that real estate services are generally bundled. Services on the seller side may include marketing, advertising, open houses and help during the negotiation process. On the buyer side, real estate professionals may spend a lot of time finding and showing houses to prospective buyers, as well as helping them navigate the purchase. Similar to other bundled services, like Internet, cable or phone service, however, bundling sometimes requires consumers to purchase services they don’t need.

More and more, consumers are seeking (and finding) an “unbundling” of such services. Years ago, potential homebuyers talked to an agent, seeking advice on areas with good schools and public transportation, or low crime — now they may research it themselves. In addition, they may be checking online for homes for sale and contacting agents about a house that just went on the market, instead of looking to a real estate agent to find them a home. Furthermore, sellers may not want open houses, or to pay for services they won’t use.

Alternatives to a Full Commission

Rates can be negotiated. If you are a seller and a contract calls for a 6% commission, you can ask whether the agent will take less. “Offer 4%,” suggests Bob Nettleton, a social media editor for a natural health products website, who negotiated the commission when he used a real estate agent to sell his home. Or, he says, offer 2% if you find the buyer on your own and just need the agent to help with the standard process. He added that other factors, such as home price and how many services you expect, may also affect how much you can negotiate on the commission.

While some worry that a smaller commission gives an agent less incentive to sell the house, it may be relative. After all, a $300,000 house doesn’t necessarily take twice as much work to sell as a $150,000 one, even though it nets double the commission. If someone saw your home on the Internet and called an agent to see it, the agent may not be any less likely to show it even if the commission is lower.

Another alternative is to look into services such as Redfin, ListingDoor or local flat-fee MLS agents that don’t use the traditional commission structure. And of course, some DIYers (or FSBOs — For Sale By Owners — as they are referred to in the industry) are using Craigslist, Zillow and similar sites to market their homes themselves.

But before you automatically think cheaper is better, there can be times when you get what you pay for. Tom Scanlon, a financial advisor with Raymond James in Manchester, Conn., tells this story: “About 20 years ago, we were trying to sell our home. It just wasn’t moving. My wife suggested we drop the price $10,000 to move it. I did the math and called my Realtor. I told her I wanted to rip up our contract. I then told her I wanted to INCREASE her commission to 7%. She drove right over to our house with a new contract. Two days later, the house was sold for very close to the asking price. All of the other agents saw the 7% commission and jumped on it!”

Buying or selling real estate is a costly financial transaction, and the commission is just one part of that. Negotiating a real estate commission may pale in comparison to the extra money you’ll pay over the lifetime of a mortgage if your credit isn’t excellent. Someone with poor credit can end up spending hundreds of thousands of dollars more in interest, than someone with great credit (this tool estimates your lifetime cost of debt, based on your credit standing).

Buyers should review their free credit reports and check their credit scores (something you can do for free on Credit.com, with updates every 30 days and get an action plan for improvement, if needed) several months before they start house hunting, in order to give them time to resolve any credit issues that arise. And for sellers, working with a buyer who has already been preapproved can help you avoid the headache of a deal that falls through due to financing glitches.